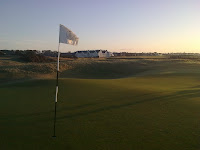 At last a few days of sun.

Forgot to mention last week the start of another seasonal, Barry McDonald. 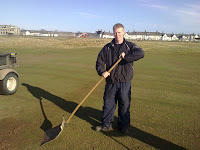 Barry will be here until the end of October along with Craig K.

This week saw a few changes between the Burnside course and the Championship course. 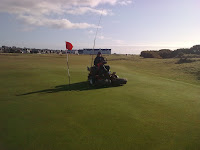 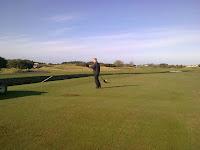 Derek and Chris coming over to the Championship 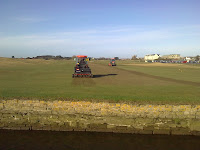 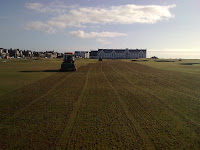 Jobs in this short week included: coring the 17th and 18th fairways, this was to try and get rid of any silt build up from all the winter flooding. 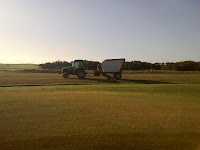 We then brushed up the cores and top-dressed using our own dune sand.
Other jobs 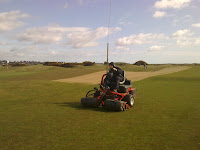 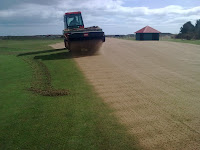 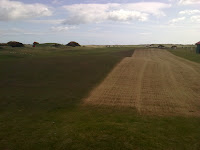 Walk-off areas, tight areas around greens and extension of fairway areas were cored and top- dressed. 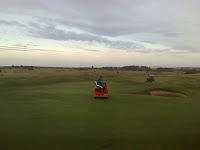 This weekend sees the first Lindsay Shield match versus Leven.

This Inter-Club Match is played every year between Carnoustie, St. Andrews & Leven Thistle Golf Clubs.
The 50 best players each Club can muster meet each other on a scratch match-play basis over three Saturdays each April, with 25 members playing at home, and 25 members playing away.
It is quite normal to find professional golfers, provided they are Club members, in each team.
The matches originated in October 1849 with 12 St. Andrews members playing 12 Leven Thistle members both at home and away, with Carnoustie joining the fray in 1873.
The matches continued intermittently with varying sizes of teams until about 1900, with St. Andrews dominating, but from 1901 to 1913 Carnoustie “claimed success after success, being rightly regarded as the greatest side in the land.”
The Matches resumed in 1919 after The Great War with St. Andrews proving “as formidable on the golf course as they did on paper.”
In the immediate post-war years, the annual matches were the highlight of the three Clubs’ golfing year, with postcards inviting members to play for their Clubs being highly prized, and the matches themselves drawing crowds of up to 2000 spectators.
Before the Tay Road Bridge was built, the teams crossed the river by ferry boat, which was regularly missed on the return journey, and required team members to get the bus home via Perth!
The Lindsay Shield itself was presented for this fixture to St. Andrews Golf Club in 1953, and this unique match in Club golf continues to be keenly contested every year by 150 golfers with handicaps of usually 5 or less.

Posted by Carnoustie Golf Links at 09:14