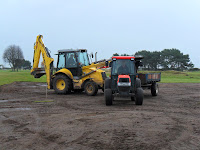 Today, the guys had to brave the elements with it being cold, very windy and with the odd heavy rain showers added 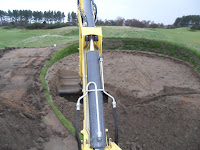 Most of the team were back at the 11th fairway, where we removed the Tay sand from the 4 bunker bases and replaced with dune sand as we are raising the fairway and the bunkers. 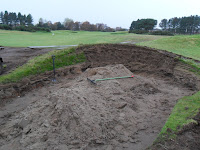 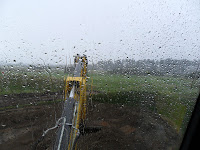 We dug the bunker faces away ready for re-building. 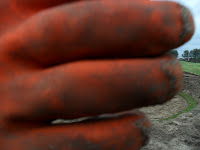 A start was made to building two of the four. 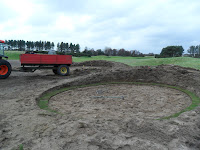 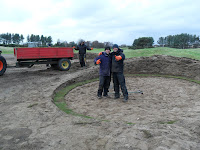 thumbs up for the base 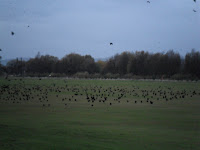 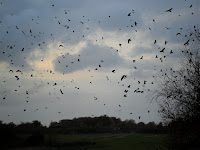 Curse of The Crows

How Carnoustie Got Its Name

Those individuals will tell you that the town got its name from the Battle of Barry in 1010 in which the Scottish King, Malcolm II, repulsed a band of Danish invaders led by their general, Camus.

History suggests that the Battle of Barry was a bloody affair that raged for hours until Camus was put to the sword. To this day, a cross in the ground of the Panmure Estate marks the spot where he was buried.

Legend has it that the Norse Gods were so incensed by the loss of their favourite warrior that they put a curse on the neighbourhood, letting thousands of crows loose on Barry Sands. Soon, the crows colonised the woodland on what is now Buddon Ness, their numbers growing to such an extent that the area became known as Craw’s Nestie, later corrupted to become Carnoustie.

The village was elevated to burgh status in 1899 and at that time local officials adopted a crest featuring three crows flying over a leafy tree.

Later, in 1927, an annual amateur tournament was launched. Originally, it was rather unimaginatively titled the Carnoustie Corporation Trophy but, after a while, that name was dropped in favour of the more colourful Craw’s Nest Tassie (a tassie is an old Scots word for a drinking cup) 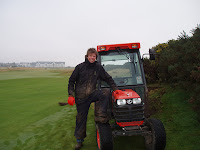 Posted by Carnoustie Golf Links at 10:47