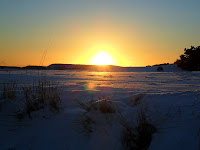 Very cold during the week 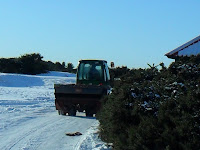 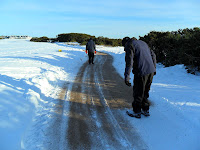 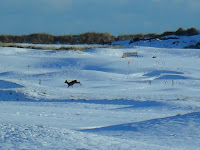 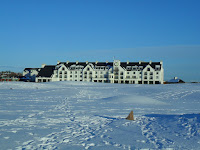 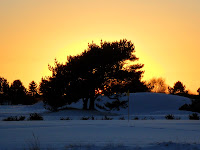 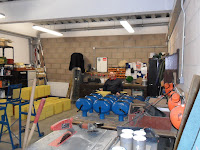 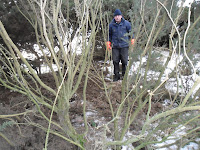 We try to keep gorse from growing tall, leggy and ugly by cutting low down (8-10 inches) to encourage re-generation 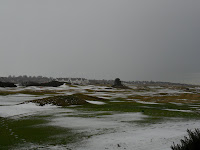 Today the thaw was on with higher temperatures due over the weekend.

November was a pretty typical month until the last week when an unusually cold snap took hold. Noon temperatures barely got above freezing from Thursday 25th until the end of the month while spells of snow with night frosts meant that the courses were closed over this period. A westerly airflow dominated for much of the month until northerlies set in from the 20th. Average noon temperature was 6○C and total rainfall measured 100 mm.

WORK ON THE LINKS

Winter works commenced with the raising of the flood prone area on the left side of the fairway just short of the 11th approach. A layer of silty soil was removed before sand upfill followed by a covering of root zone. The turf was re-laid and rolled. Work continued on this hole with turf removal and set aside in the landing area between the four fairway bunkers. Meanwhile the four bunkers were rebuilt and raised appropriately to allow an increase in the floor height of at least one foot. Existing Tay sand in the bunkers was removed and stored for future return while the build up in levels was achieved with our own stock of “dune” sand. Following rotavation, the existing root zone material was stockpiled at the perimeter of the working area and sand was driven in to raise the area to suit new bunker levels. The infill was shaped and firmed prior to root zone replacement. Some turf was re-laid prior to the snows towards the end of the month.

The winter circuit was set up at the beginning of the month, with post and string placed as required and winter tee boxes, ball washers and hole tins installed.

Mowing was limited during November as usual although tees and greens were “topped” in the first half of the month. Greens were rolled on two or three occasions especially following verti draining.

Bunker revetments during the month included:-

Total weedkiller (glyphosate) was applied to the bunker head area at the right hand side of the 14th hole and the sea lyme patches to the right and rear of the 16th green as a further trial to assess results.

Remaining fairways were top dressed when suitable conditions prevailed followed by the usual brushing in.

A preventative fungicide was applied to greens in the second half of the month.

Bunker sand was shaped as required during the month.

Divot scars were plugged on the 8th and 13th tees while turf repairs were carried out to bridge crossing ends and certain parts of walkways as required. Turf was stripped from the right hand bank at the 5th green and reshaping commenced before the snows at the end of the month.

The low mounding and existing trees were removed from the west side of the Tea Hut in preparation for the new construction. Underground services were identified for the builder whilst they, Land and Building, demolished and removed the existing building. The slabs on the east side of the building were lifted and stored for future use. Three birch trees were transplanted in the poor area of rough to the left of the 10th hole while three alders were planted to the left of the 10th tee.

Miscellaneous jobs carried out in November included screening sand, repositioning certain granite tee yardage stones for improved alignment and safety, ditch clearance and at the end of the month snow clearance and salting on access roads.

The monthly wetting agent application of “Revolution” was carried out at the beginning of the month.

Three bunker revetments were carried out during November. Two on the 12th approach and one to the left of the 16th green which remains incomplete.

Following turf removal over the relevant section of this fairway, silty soil was removed down to the base sand and transported to the rear of the 15th tee. Previously salvaged sand along with material from Cotside Quarry was driven to the area to raise levels accordingly. The deepest infill of over two feet was to the extreme right side of the area to marry into the existing bank. The area was shaped to form appropriate contouring and a 2” – 3” layer of root zone mix spread over and suitably firmed. The irrigation pipework and sprinklers in the area were raised to suit the new levels. A fescue turf mixture was then laid but the onset of wintry weather prevented the completion of the work.

Bunker revetments during the month included:-

Greens and approaches, teeing grounds and fairways were all either solid or slit tined during November.

Greens and approaches were brushed and cut in the middle of the month.

Turf was removed around the trio of bunkers at this former double green. The central bunker of the three was infilled as arranged and the two remaining were reduced in size and faces revetted accordingly. The central area was shaped with sand infill to form a contoured swale which is still to be completed due to the wintry weather.

Work continued with the 11th hole alterations. The area surrounding the new frontal bunkering arrangement was shaped as was the infilled rear bunker into a swaled green run-off. The rearmost area next to the gorse was stripped and turned over and awaits shaping. The ground around the two fairway bunkers was shaped but also awaits completion prior to turfing over.

Six staff members received digger, forklift and / or tractor training towards the end of the month.

Posted by Carnoustie Golf Links at 10:32