From the surplus proceeds of the 1892 bazaar, which enabled the purchase of the golfing ground from The Earl of Dalhousie, an “auxiliary” 9-hole course was constructed on the vacant ground (rabbit warren) to the north of the 18-hole course to Bob Simpson’s specifications.

Within 2 years, following the rapid increase in the countrywide passion for golf, the local councillors called in Old Tom Morris for advice as to how 2 18-hole courses could be fitted into the ground available.

Old Tom visited in the summer of 1894 and supplied a plan to meet the requirement. However after much deliberation it was concluded that the plan required so many new greens and would cause so much disruption that the course may take years to reach the standard of the existing one. Instead Morris and Simpson were instructed to proceed with a more limited alteration to relieve pressure on the 18-hole course by strengthening the outward half making it especially daunting for casual players while making the 9-hole course much more convenient for them. The subsequent changes were to be the last in which Bob Simpson took part.

By the summer of 1901 rounds on the 18-hole course were booked practically throughout daylight hours. Much time was spent again on proposals to form 2 18-hole courses by converting some existing greens into double ones and bringing “relief” greens into full-time use. Schemes were terminated firstly by the change in administration on the establishment of the Committee of Management and secondly by the fact that additional ground to the east of the “dyke” became available. Early in 1902 the cottages and garden ground (3.75 acres), properly called “Burnside” but by then known locally as “South America” came on the market. The Committee of Management acquired the land at a price of £500.

Some years would pass after 1902 before golf could be played on “South America” and in the meantime the rough ground was levelled with the introduction of hundreds of tons of top-soil. Much of the wasteland in the extreme southwest corner of The Links was cleared (current 7th and 8th Championship).

In 1910, following lengthy negotiations the 9 acre Ravensby carrot field (2nd and 4th holes Burnside) was finally purchased, at last providing sufficient ground for a worthwhile
18-hole second circuit. Various proposals were submitted before The Golf Course committee decided in 1911 to approve a plan drawn-up by J.P. Bruce, a Dundee architect and Caledonia Golf Club official. Willie Park Junior, Open Champion 1887 and 1889, was commissioned to plan the bunkering of both courses and he looked over the locations at the end of January 1912, immediately conspicuous elements in the Bruce plan were the transfer of “South America” and the “Dyke” hole to the “Supplementary” course, previously known as the “Duffers” course and subsequently the “New” course. There were also several poor new holes around Jockie’s ditch and the valley (no.2 Championship). Prolonged drought during the summer and autumn of 1913 caused the inception of the new holes to be repeatedly deferred, and the altered courses were not finally opened for play until April 1914.

Early in 1915 it was decided that “South America” must be restored to the premier circuit and a further recasting was completed by that April.

During the 1932-33 winter the “New” course was lengthened and reconstructed to form largely what we know today.

At the beginning of the 1935 season the courses were formally re-named – Medal & Burnside, in place of Old & New.

Some bunker alterations have been carried out in modern times, whilst the 13th green (mid 1990’s) and the 5th green (2004) have been re-built in house. Total bunkers currently on the course number 45. 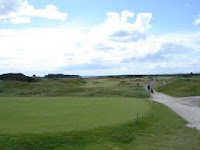 Carnoustie’s third course was constructed on land purchased by Angus County Council from The Ministry of Defence in 1977 (hence the hole names reflecting battles mostly from the 2 world wars).

The layout follows the perimeter of the Championship Course and is therefore the most remote from the maintenance facility and the golfing hub of the town. The course was designed by Alliss/Thomas Design, and I suspect constructed to a budget, before opening in April 1981.

The course was generally perceived to be too long and difficult having penal rough and small awkward greens and consequently unpopular with local golfers and visitors alike. The Links Management Committee (formed in 1980 by popular request to manage the courses) policy was therefore to shorten the course and make it more amenable for play, especially for junior and senior golfers as well as beginners. A greens reconstruction and enlarging programme was agreed along with teeing grounds and necessary re-bunkering. The initial layout required alteration anyway due to the location of the 18th hole, across part of the bay, contravening long standing bye-laws in an area of public recreation.

The shortening of the course was achieved by splitting 3 par 5 holes into 3 par 4’s and 3 par 3’s whilst returning the 18th to public recreation and incorporating what were the 2 most remote holes, the 8th and 9th into the practice facility and turf nursery.

The first par 5 to be split with the creation of 2 new greens teeing grounds and bunkering was the 600 yard 14th hole allowing the removal of the contested 18th. This was followed by the splitting of the par 5 5th and 10th holes to permit the removal of the original 8th and 9th. The re-vamp of the course over an approximate ten year period 1986-96 encompassed the rebuilding and some necessary re-sitting of 17 greens (including the practice green on the site of the former 9th) along with all teeing ground reconstruction and additions as well as re-bunkering the course.

The only original 1981 greens and bunkering remaining are the 1st and 18th (former 17th), all of the re-design and re-construction was done in-house.

Over the subsequent years we have been able to increase course maintenance procedures and the course has steadily gained in acceptance and popularity especially in recent years as course playing quality has improved dramatically from early years. Following the success of the course work and presentation allied to the potential for development, consideration is being given to creating a more challenging “second” course to the Championship with similar standards of turf performance and presentation.

With the current course consisting of seven par 3’s and only one par 5 and The Burnside Course having serious limitation for extension that appears to be a most worthwhile ambition for The Buddon Course and the overall future golfing facilities provision at Carnoustie Links, matching the progression in the game generally.
Posted by Carnoustie Golf Links at 11:05