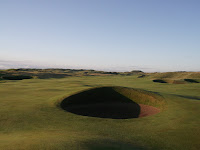 Another great week of weather 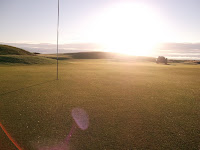 Last week after the seeding, we rolled the greens after cutting them in the mornings to try and smooth the surfaces even more. By the weekend the greens were rolling good. 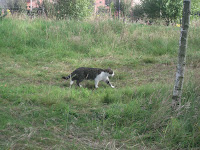 
Saw this on the news and reminded me of our Links Cat. 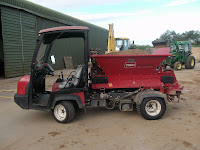 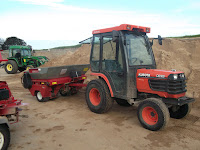 On to this week, approaches and surrounds were top-dressed. Ditches were cut and cleaned out and a start was made to cleanng out the burn. 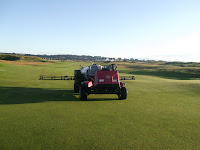 Our monthly wetting agent programme was due on the greens and conditions were perfect for a change!


The Tassie as the abbreviated version is popularly known has grown into an institution where amateur golfers return to Carnoustie year after year after year. First played for in 1927 it is limited to 351 golfers (or other number determined by the Links Committee) whose handicaps must be 18 or below.

In January of 1927 a meeting of influential local golfers took the decision to introduce an annual open amateur tournament to be called the Carnoustie Corporation Trophy. Two months later the organising committee adopted James Wright's (the designer of the last 4 holes on the Championship Course) proposal to name it instead the Craw's Nest Tassie, honouring the fanciful notion that the town's name had been derived from "Craw's Nestie".

The Tassie itself a solid silver drinking bowl decorated in Celtic pattern was crafted by Messrs Crabbe and McKenzie, jewellers and silversmiths of High Street Carnoustie at a cost of 100 Guineas. The designer was Murdoch McKenzie. The business operated in the town from 1912 until 1935 when it was moved to Rothesay. Murdoch died there in 1954.

Amongst the first years 124 competitors was Joshua Crane of Brookline USA, the originator of the abstruse system of rating golf courses on a handicap basis weighing up the terrain, hazards etc. He measured Gleneagles at 84.6, Sandwich at 83.8, Muirfield at 83.5 and the Old Course at St Andrews at 71.8. The first event was won by a local Mr Alexander Mann, an ex amateur champion of India who defeated Mr Len Nettlefold who was at that time the amateur champion of Australia.

The Tassie is now always played for in the 1st full week of September each year and one of it's early participants the aforementioned Mr Crane who loved the event so much he donated several trophies to the Carnoustie Golf Club which are still competed for today. Alongside the Tassie is the Maulesbank Trophy a much younger event given its introduction in 1933.

The week begins with 2 qualifying rounds, one on the Championship Course and one on the Burnside Course. From the starting field the top 64 combined scratch scores are then drawn to play matchplay through the week for the Tassie on the Championship Course. The next 64 nett scores compete for the Maulesbank Trophy in matchplay on the Burnside Course. For those who did not qualify for either, then there is the consolation sweepstakes on Wednesday and Thursday with prizes available. By the time Friday arrives simple bounce games are played by all those who are not competing for either of the 2 trophies.

The whole week is one of cameraderie and the local clubs open their doors to the competitors and provide evening entertainment, everything from comedians to quizzes to karaoke. This is why Tassie entrants have been coming back for years and in some cases decades on end. Currently regular competitors are coming from all parts of the United States, Sweden, Holland, Spain and the UK.

Posted by Carnoustie Golf Links at 06:14