The award was presented by Sir Michael Bonallack on behalf of the STRI and Carnoustie Links were represented by Championship Head Greenkeeper Sandy Reid and greenkeeper Gavin Lowe.

Dr Bob Taylor, head of the STRI Ecology and Environment Department, said “ This was a very difficult decision as there were many Scottish golf courses who have carried out wonderful environmental work in 2009, but Carnoustie have really shown enormous commitment to improving the environment in many areas. They have done particularly excellent work in pro-active gorse management, and in re-establishing heather beds by transplanting heather into areas where its future health will not be compromised. They have also restored a long established dump area back to its original form as a marram covered dune and the judging panel felt there could only be one winner for 2009.”

John Philp, Links Superintendent at Carnoustie, said “The staff at Carnoustie are very proud to have received recognition in the form of this award as there is real commitment within the workforce to work with the natural environment and improve areas where we can. It is particularly pleasing that work on all 3 courses has been recognised, with extensive gorse and heather work taking place on the Championship and Burnside. The Buddon Links team have been responsible for restoring a dump into a marram grass dune and, of course, have also carried out gorse and heather improvements”.

The STRI awards are nationally recognised as the most prestigious environmental awards in Britain. 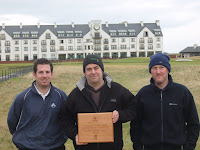 Busy week on the Links so far. Bunker building teams finished at the 2nd,4th and 6th holes and have now moved to the 16th. 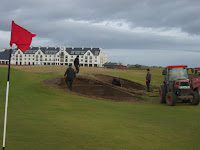 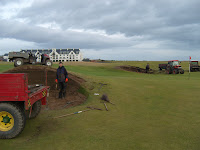 Greens and approaches were spiked on Monday and then rolled behind on Tuesday.
Today we made a start to top-dressing fairways as the weather was on our side, hopefully tomorrow we can get a few more done.
Posted by Carnoustie Golf Links at 10:55

Plans of opening the rest of the course for the weekend were banged on the head due to torrential rain overnight.

Today, turfing heather at the 5th hole was completed. Bunker construction at the 2nd green was continued, as was the 4th green.

Greens were sprayed with a disease proventative.

Sandy (Head Greenkeeper) filling up the sprayer getting ready to go

Holes were changed and bunkers were raked ready for the weekend.

Posted by Carnoustie Golf Links at 07:22

Paul and Malcolm at 7th
Yesterday (Wednesday), apart from continuing bunker construction at the 5th, we turfed an area that used to be gorse at the lhs 7th hole.

We also had a few issues with machinery.

Derek the Mechanic fixing the Turf-cutter.
Today the bunker squads:
Kevin and Mark
Chris and Steve
Duncan and Stuart G went to start building at the 2nd green.

Whilst Stuart K went to the 4th green to build.
Paul and Malcolm finished turfing rough turf at the 7th yesterday, so they turned their attention to turfing the mound in front of the 5th tee with heather.

Turfing heather at 5th and a view down Hogans Alley (6th).
Posted by Carnoustie Golf Links at 17:27

Hard frost with some fog first thing today. All the guys were back on the same bunkers as yesterday. Once the frost lifted we took the dew off of the greens.

(picture right) Malcolm taking the dew off of the green with Margaret the Ranger watching.

Posted by Carnoustie Golf Links at 17:17


Slight frost this morning so we left the pins on the winter greens, apart from the frost a beautiful day on the links. There is a lot of bunker work to do on the course in preperation for The British Seniors Open (19th-25th July). Today, we started to build 6 bunkers all on the 5th hole.

Stuart G and Duncan at left side of 5th fairway

Chris and Steve at right side of 5th fairway

Kevin and Mark at 5th approach

Brian and Stuart K at bunker half-way up the green

Craig at the bunker front of the green

Posted by Carnoustie Golf Links at 10:45

Today we got the course ready for the weekend, still couldn't change the holes for the frost though. Bunkers were dug out and areas were prepared for turf. In the paintshop our normal handyman (Barry) has just had an operation on his knee so he is off for a few months. Paul has stepped in to keep everything up to date this includes: painting signs,tools and preparing all the summer furniture that goes out on the course in April.

Paul in the paintshop with Stuart K helping out

Posted by Carnoustie Golf Links at 16:33

The frost is slowly coming out of the ground but the odd shower of rain is not helping, a few more puddles on the fairways today. Today we continued digging out bunkers ready for revetment, areas where gorse was cut away is prepared for turf, screening bunker sand in the shed and putting grow sheets on newly reveted bunkers.

Craig at the 5th green

Chris and Mark at the 6th fairway(honestly, there just good friends)

Posted by Carnoustie Golf Links at 15:57

Even though most of the ice has gone, we still have a few puddles on the course. Jobs today include screening sand, cutting back more gorse, digging out bunkers for re-building and preparing areas ready for turf.

Brian and Malcolm prepare an area for turf

We couldn't turf the areas we prepared today due to the turf nursery still being under frost, hopefully tomorrow.

Posted by Carnoustie Golf Links at 14:42

A thaw at last. Courses still closed, hopefully will be open for the weekend but there are certain areas of the course still with ice underfoot. Gorse management is still ongoing, tomorrow we should get back to building bunkers.

14th hole view of The Spectacles

Posted by Carnoustie Golf Links at 18:24

December was a short month with seasonal holidays reducing staff numbers from the 21st onwards. This coincided with the onset of the current cold spell which closed the courses and restricted turfing and aeration work. Work then focused as usual on gorse, broom and tree management as well as chipping. Some fence repairs were carried out along with screening and driving sand and waste turf, carrying out competency checks and staff training in general.

Traffic routes and certain areas of rough were verti-drained early in the month as were lower silt affected sections on the "island" of the 17th hole. The 10th green was mini-tined and top-dressed to help dilute remaining silt from the November flooding.

Greens, winter green areas and fairways were mown early in the month.

A sulphate of iron mix was applied to greens, approaches and surrounds early in the month.

Several fairways were top-dressed in the first week of the month. This process ceased with the forecast for wintry conditions.


Grow covers (fleece) were installed to a number of new bunker faces including:

December was a colder month than normal due to the cold, wintry conditions which set in on the 17th of the month. Day temperatures have been little above freezing ever since with night frosts virtually continuous. The average noon temperature for the month was 3.5 degrees centigrade and total rainfall 62mm. Winds in the early part of the month were generally westerly, as usual, turning more northerly from the middle of the month A surface thaw to the snow cover around the 26th of the month resulted in water turning to ice with sub-zero temperatures overnight. The worst affected areas were as usual greens, tees, approaches and fairways where frost had penetrated the most. The course remained closed from the 18th of the month into January.


Posted by Carnoustie Golf Links at 08:40

Well another cold one on the course today. Same jobs as yesterday for the guys.

Posted by Carnoustie Golf Links at 10:50 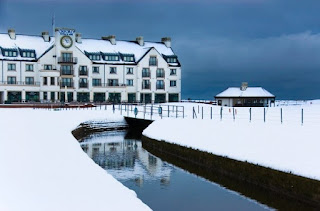 Well today is the first day back for most guys after the Christmas holidays and a very cold one. All courses are closed at Carnoustie right now due to the weather. As you can see from the main picture we still have a layer of snow and ice with more snow due tonight. The jobs today include trimming back gorse , chipping gorse, screening bunker sand in the shed and the removal of mound in front of the 5th tee.

Posted by Carnoustie Golf Links at 15:50