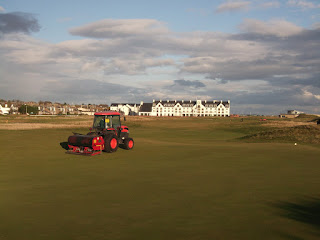 Well it has been a busy two weeks. 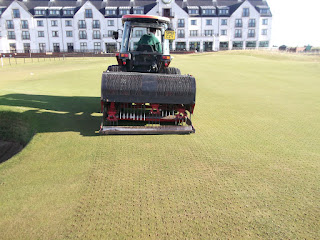 With the course being shut the last two weeks (Mon-Fri) we have been able to get on with some verti-drain work on greens and fairways. 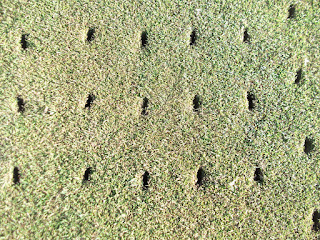 1/2 inch tines going down about 9 inches and with no heave - straight in straight out. 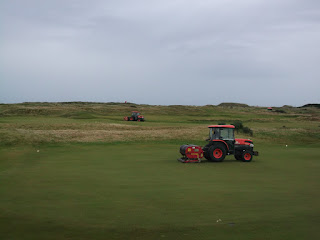 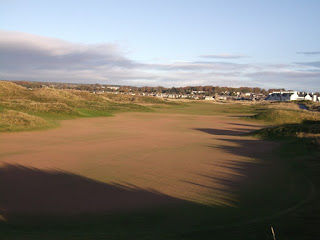 Once the greens were verti-drained they were: double rolled, top-dressed, brushed in and double rolled again for golf at the weekend. We are trying to get as much sand in to the profile as possible. 14 tonnes of sand put on the greens that takes us to just under 200 tonnes of top-dressing applied this year. 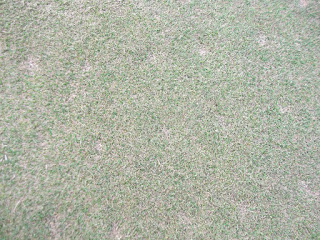 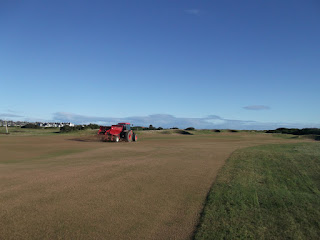 Another area to get some top-dressing was the fairways. 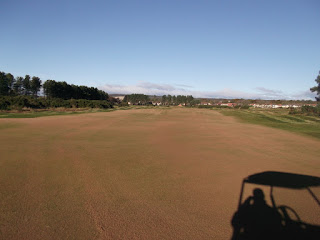 Great to get some sand in when the weather is on your side. 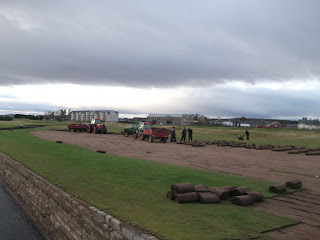 Last week the main job was lifting the fairway turf from the 17th fairway. This turf was put down at one of the new holes on the Buddon course. All turf saved. 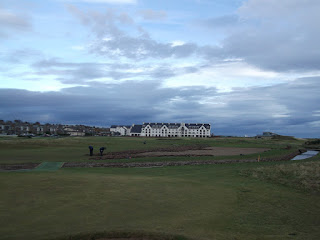 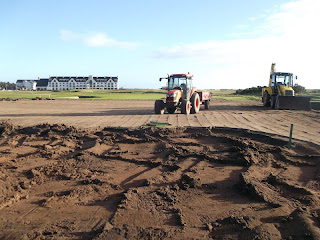 A start was then made this week to scraping the top soil to one side. 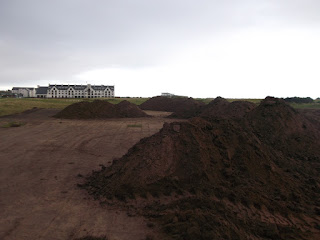 We will now drive in sand from an area of rough between 10th and 11th. We are trying to raise the fairway up and shape the land so that anymore water that comes from the burn flooding will go back into the Barry Burn rather than sitting on the fairway. 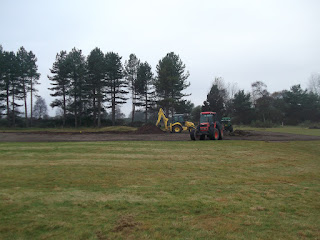 Another job on the go is at the 9th, a bad area for flooding after heavy rain. 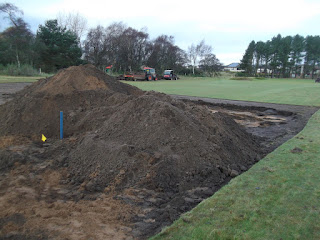 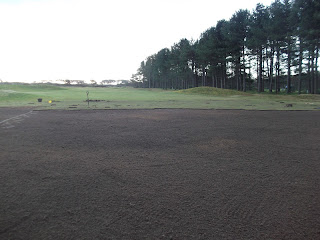 then adding a scattering of topsoil back on top of the sand. 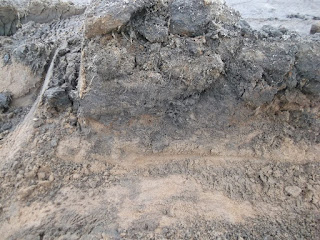 As you can see the topsoil is too thick and too rich. It is not allowing water through. Most of the topsoil saved from this job will be mixed with sand and used on other jobs on all three courses. 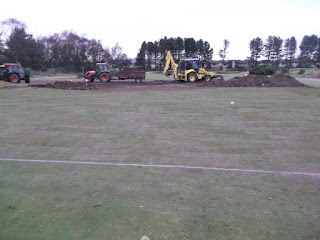 Job half completed and we hopefully finish turfing this next week. 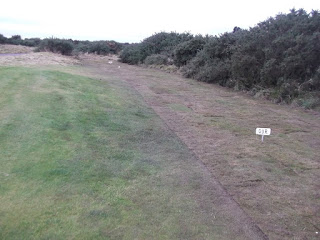 The road at the right hand side of the 6th green has been turfed. 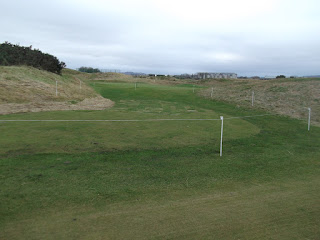 One of the mounds between the 1st green and 2nd tee has been lowered. 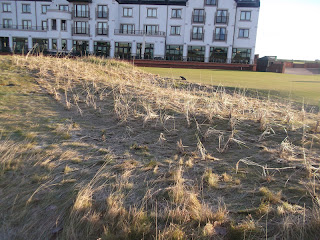 A mound created between the 18th green and 1st tee to stop golfers coming off the course this way. 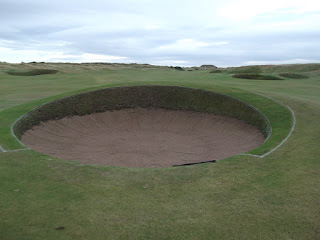 Braids bunker on the 2nd fairway has been lowered. We can now cut the head of this with the fairway mower giving a much better appearance.

Posted by Carnoustie Golf Links at 04:44


October was reasonably settled apart from a very wet period in the middle of the month which again caused serious flooding on parts of the courses as the Barry Burn burst its banks.


The favourable weather at the start of the month allowed for any renovation work to continue without hindrance with scarifying, coring, seeding and top dressing being the main tasks.


The flooding of the Barry Burn on the 12th of the month meant that there was a big clean up required afterwards with silt removal, aeration and top dressing taking place for a fortnight afterwards in order to get the affected areas back into suitable and safe areas to play from. The 3rd hole of the Burnside remained closed right through October.


A spray of Sulphate of Iron & fungicide and an Autumn/Winter fertiliser mix were both made to the greens prior them being verti-cut and being overseeded with fescue using both the Dyna-seeders and a disc seeder borrowed from Panmure Golf Club. They were top dressed thereafter to keep surfaces smooth and were Hydro-jected towards the end of the month.


·        Surround and approaches were top dressed and fed as required


·        Weaker patches on fairways were overseeded


·        10th green along with 10th & 11th fairways were hollow cored, top dressed and verti-drained to help dilute the silt and alleviate the flood left from the Barry bursting its banks


Selected greens, areas of greens and approaches were deep scarified and/or solid tined followed by being top dressed.


Greens were top dressed twice and received an application of 4:0:8 fertiliser. The 1st and practice greens were deep scarified and overseeded with fescue.


The new seed is establishing reasonably well although there have been some isolated pockets of disease.  The whole area was fed, sprayed with fungicide, and rolled through October and any remaining posts, rope and exposed stones being removed from the site.


The 2 walkways over the ditch at the left of the new 10th hole and the traffic route in front of the new 11th tee were turfed using turf from our nursery.


·        We had Neil Christie from NPORS on site to carry out training and assessing on the use of the forklift, digger and tractors with 12 members of staff gaining qualifications (4 in each category)


·        Ron Brown, the retired foreman of the Dick Precast works, came in to teach one of the members of staff, Derek Murray, how to make the concrete decking we use for bridges on the courses


·        I attended an Appraisal training course in Aberdeen