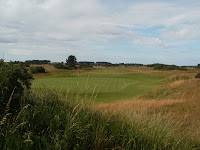 Greens, approaches, surrounds, fairways and tees all cut. Greens sprayed with seaweed and a very light rate of ammonia and iron (all liquid form). 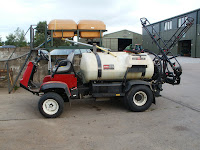 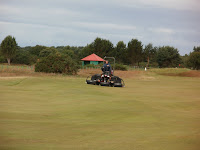 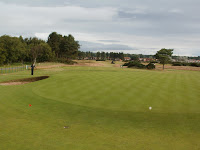 Other jobs mid morning included: cutting the burn bank, hand watering the greens(until the rain started) and cleaning out the ditches/ refilling with gravel in needed areas. 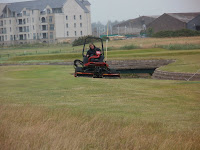 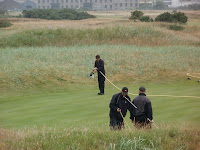 Friday, saw the arrival of the first of the portacabins for the upcoming tournament. 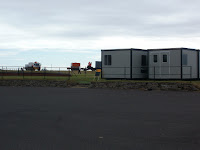 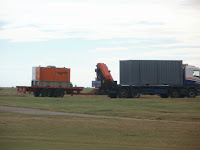 Another weekend of hand cutting in preparation for The Seniors Open. Rain again on the Saturday, luckily it just poured down after we were finished.

Greens were hand cut and sprayed behind with wetting agent and a disease preventative.

Approaches, surrounds and tees were cut with triples. 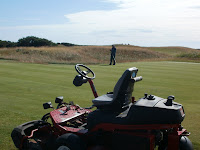 Low areas on the fairways were verti-cut and cut behind with triples.

Odd weeds around the course were sprayed. 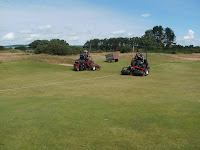 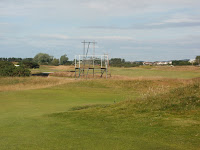 Over the weekend, the contractors had made a start to erecting the scoreboards, 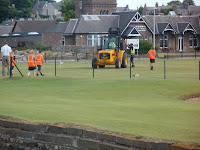 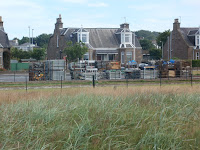 and today, they were busy building the grandstand at the 18th green and placing the yardage boards on the tees. 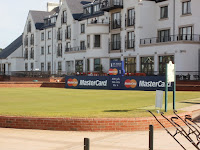 At the 16th tee, our mechanics (Eric, Steve, Derek and Kevin) were busy taking down the safety fence. The fence acts as a barrier, from stray golf balls coming over from the 10th hole on the Burnside course. 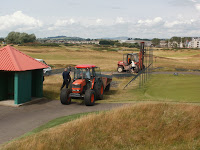 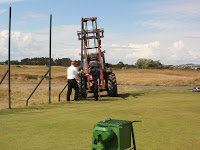 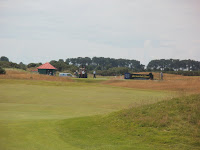 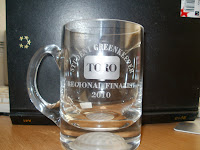 Finally, a wee while ago i was nominated by Elmwood College for Toro Greenkeeping Student Of The Year 2010. Out of 3,500 students in the uk, 37 individuals were picked for regional interviews, luckily i was one of them. On Thursday, i went to Glasgow for the Scottish regional interview and today i had confirmation that i have been selected as one of 8 finalists to be held at BIGGA (British and International Golf Greenkeepers Association) House in York on 12th and 13th of September.

I would just like to thank Carnoustie Golf Links for giving me the chance of further education and Mike Clark from Elmwood College for the encouragement on completing my course.

Posted by Carnoustie Golf Links at 07:52